Geoffrey Grimmett (1968), Professor of Mathematical Statistics, was the speaker at this annual lecture and drinks on Tuesday, 18 March 2014. 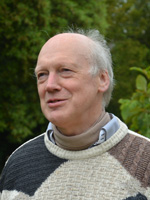 The lecture, titled The unreasonable effectiveness of the square root of -1 considered how the invention in the 16th century of the squareroot of -1 was a revolution in mathematics and its applications. Of its many applications, Professor Grimmett outlined recent prominent work at the junction of probability and mathematical physics.

Professor Grimmett is a mathematician working in probability theory. He is the Professor of Mathematical Statistics in the Statistical Laboratory, University of Cambridge, and became the 17th Master of Downing College in October 2013. He is known for his work on the mathematics of random systems arising in probability theory and statistical mechanics, especially percolation theory and the contact process.

A copy of Professor Grimmett's presentation can be found at the bottom of this page.

View photos from the Cambridge Lecture and Drinks.