This year's lecture took place at Nuffield College, Oxford on Thursday, 30 April 2015. The guest speaker was Richard Mayou (1958) who presented a lecture entitled: Oxford Botanic Garden is Britain’s oldest – can it be the world’s best university Garden? 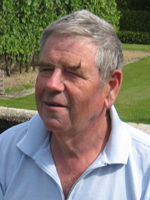 Richard Mayou (OE 1958) is Professor of Psychiatry at Oxford University and a Fellow of Nuffield College. He was an undergraduate at St John's and returned to Oxford in 1973. Apart from his career in academic psychiatry he was a member of numerous major medicine and University committees from 1990-2005 and was Assessor from 1999-2000. Now retired, he is Chairman of the Nuffield College Art Committee (helping to create a major collection of contemporary art) and Chairman of the Friends of the Oxford University Botanic Garden.

Following the lecture there was a drinks reception and canapés in the Senior Common Room.

View photos from the lecture.