The second Tolkien Lecture was held on Thursday, 6 June 2013 in the Ruddock Performing Arts Centre. Andrew Graham-Dixon, one of the leading art critics and presenters of arts television in the English-speaking world, delivered the lecture. 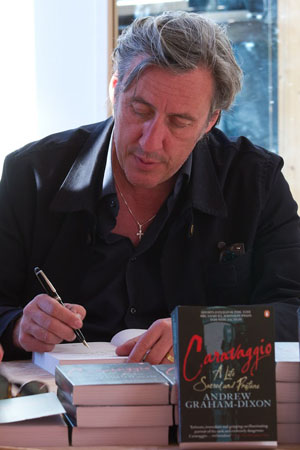 Born in London in 1960, Andrew Graham-Dixon has presented numerous landmark series on art for the BBC, including the acclaimed A History of British Art, Renaissance and Art of Eternity, as well as numerous individual documentaries on art and artists. For more than twenty years he has published a weekly column on art, first in the Independent and, more recently, in the Sunday Telegraph. He has written a number of acclaimed books, on subjects ranging from medieval painting and sculpture to the art of the present.

He has a long history of public service in the field of the visual arts, having judged the Turner Prize, the BP National Portrait Prize and the Annual British Animation Awards, among many other prizes. He has served on the Government Art Collection Committee, the Hayward Advisory Committee, and is currently a member of the board of the Baltic Centre for Contemporary Art in Gateshead.

In the course of his career, Andrew has won numerous awards for writing and broadcasting and his achievements have been acclaimed by many of his most distinguished peers.